My first post is going to be a cheat… I’m going to copy a lot of the post from a previous entry on my brit expat in rio blog, and expand on it a little.

Over the last few years I’ve been flying quite a lot, heading back to Europe almost once a month in 2013 for various reasons… But I haven’t ever posted anything about airlines and my experiences. And as I thought I should post before the end of the year, here is my mini review for those coming to Rio!

For this post, I am going to review my flight from London to Rio, via Madrid.

Most of the time I am flying to London, and have used BA, but a few months back it was significantly cheaper to take the Iberia flight via Madrid, and only 3 hours longer overall, so I went for that route.

I had travelled on Iberia twice before, but both times in economy (or Tourist Class) on a business trip.   I had both the newer (A330) and the older planes (A340-600) with the older interior. This meant not even having any In Flight Entertainment in Economy… It isn’t an experience I want to repeat really…  On the A330 the overall experience is quite similar to BA’s 777 on the Rio route.  The IFE system is decent but not the biggest English movie selection. But a huge improvement on before still, although the seat recline is somewhat reduced from the older cabin I thought.

This time though, it was was a holiday, and for holidays I always see the flight as part of the experience, and if I can I like to fly business, and I checked before booking that the flight was operated by the new A330, guarenteeing the new Business Plus cabin (the same cabin is being rolled out on the A340-600s – you can tell from the plane if it is the new or the old – an A340-500 = new business, an A340-200 or 600 = old business).  Later in the year I have a flight booked on the old Business Plus, so I will share my thoughts about that to you then!

For this flight, I selected a window seat (2L).  As you can see on SeatGuru, there is only one seat on the window side of the aisles, but not all window seats are equal!  Their new Business Plus is in a staggered layout giving 4 seats across in each row, although as it is staggered they alternate in layout – there is only one row of seats between the aisle and the windows so no one sits next to you, but on some you sit next to the window, others next to the aisle and the window is further away from you because of your table and storage are. Equally on the middle, two seats are together, then apart next to the aisle with the tables in the middle.  So again, be careful if you are travelling alone – the middle ‘honeymoon’ seats could make for an uncomfortable journey, as you are as close as you would be in economy, but great for travelling as a couple.   I have had a subsequent flight travelling with my fiancee where we took the middle two seats (row 1, 3, 5).

Unfortunately I wasn’t thinking to take any good pictures, but snapped a couple. 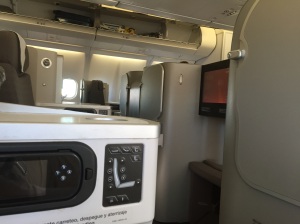 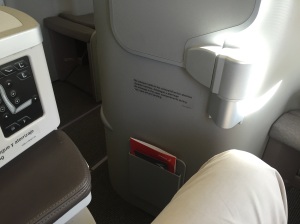 The seat itself has a massage function, and is quite adjustable, but the seat base move forwards in steps with a certain amount of recline available, then it moves another step forward for more recline, but due to the location of the leg rest / ottoman (fixed position) eventually you just have to put your legs up or have them chopped off! I’m a big fan of the ‘Z’ position available on BA’s Club World seat for watching a movie, which is unfortunately not available. Also the TV screen is fully fixed, so when very angled or in the bed position, the viewing angle to the screen is quite bad and it can’t be tilted down. 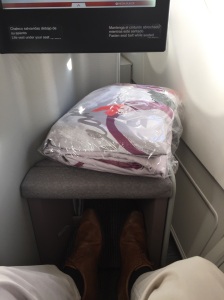 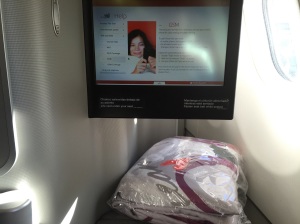 There is a lot of storage space and a decent amount of privacy. BA’s is arguably more private at the window seat, but does not have no where near as much storage space to put things. And there is direct aisle access without the issue of having to step over someone’s bed in BA if they are sleeping! And to top it off, a nice wine selection too. Talking about the on board service, we were offered a small bag of L’Occitan products as well as the standard washbag – a nice touch with some nice hand cream, lip balm etc. but the washbag products were not great, I guess why the after addition!

For the initial drinks service cava was offered along with  a nice choice of olives as well as the more traditional nuts. The main meal had a decent looking selection on the menu.  I selected a meat cannelloni.  The table was well presented with a table cloth on the table, and there was very attentive service during the meal in taking away empty plates, refilling wine etc.  But…. the meal itself though was quite a let down..  First I was served the wrong meal, and the cannelloni itself was something I might expect to find in economy I thought!   However, one of the highlights of the drink service was the excellent Pedro Ximinez sherry and being offered a tasting of the two very enjoyable Spanish brandies on board.  In general, the wines and drinks were quite decent.  The steward looking after me was excellent, and all the crew spoke a good level of English.  It’s also worth mentioning that the tray table itself is very stable, unlike the BA Club World table that can wobble quite a bit.

Oh, and we also had some great views on the flight! 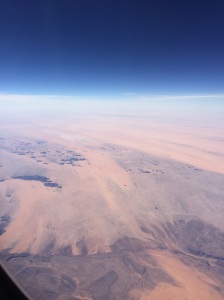 Once the transformation of all the planes is complete, the new Iberia Business Plus is one of the better I have flown in as a hard product, and on this flight the service was also very good.  But the food, and sometime the service as well can let Iberia down I’ve found.  Also the IFE, although a good system, is lacking in English language movies. Nonetheless, I am now giving them far more consideration to them in the future, as the stop via Madrid doesn’t make the flight too much longer than the direct if it is a better buy. Unfortunately, there is no Premium Economy cabin still.

Of course on this flight, I had to get to Madrid.  I actually like Madrid T4/4s – I think it is a very nice looking building, a good lounge, and a decent selection of shops, and I don’t mind the transfer here.  On this journey I stayed the whole time in 4S as BA flights depart exclusively from here.  The lounge in 4S is my favourite as it caters for long haul flights, as well as European – this means a better food selection with hot food options.  The lounge in T4 is only for European flights – it has the same drinks selection, but only sandwiches and salads for food.  If you are connecting via Iberia to London it leaves from T4, so bare in mind there is a transfer between the terminals – if you are on a short connection <1 hour, it could be very tight to get from T4 to T4S, as there is a passport control in between as well as an automated train to take you to and from.  The roof of T4 (and similar in 4S) is beautiful though in my opinion – very nicely designed: 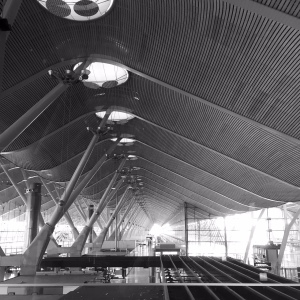 For the MAD-LHR leg, I flew in the new Club Europe cabin LHR-MAD…. Except, in a way I didn’t – I was flying on the new Club Europe cabin, and there is no longer a dedicated set of seats with more leg room – the whole cabin is the same, they just close off the middle seat with a table… This gives them flexibility to increase and shrink the Club Europe cabin – but it makes me question why am I paying more? Not having someone sit next to me… Of course you do get Champagne to drink, and the food is a little bit better. Of course there are other perks besides the flight experience itself, such as lounge access and priority boarding and exiting of the plane. The seat itself looks good and ‘classy’, but for a premium business class product, I really think this is a mistake from BA to reduce the leg room. The recline is all but non-existant (nice for not having the person in front intrude of course, but not so nice for me wanting to sleep a bit on my 630am flight). On a 45 minute Paris flight, who would notice… but on a 2.5 hour journey this is the sort of thing I would have been inclined to pay for… With a BA Silver card you get lounge access, priority boarding, business class check in (in fact even a Bronze card gets the last two).

As I said, I have another Rio-London flight via Madrid bookedin December, and I’ll be flying on both the new and old Business Plus, and also a BA 767 for the connection to London, which should have the old Club World flat beds – for the same price the product can vary a lot!  I have also flown in Iberia Business, which is similar to the older BA Club Europe product, just blocking off the middle seat, with a couple of extra inches of leg room.  It is worth saying if you are flying economy, Iberia do not have a free food or drinks service in economy, unlike BA.

Next up, a review of a recent flight in BA First London – Rio, American First New York – Sao Paulo, American Business Rio – DFW, and London to Edinburgh in a plane nearly as old as me it felt like…   And some hotels perhaps!